All About Roscoe
No Longer Accepting Applications 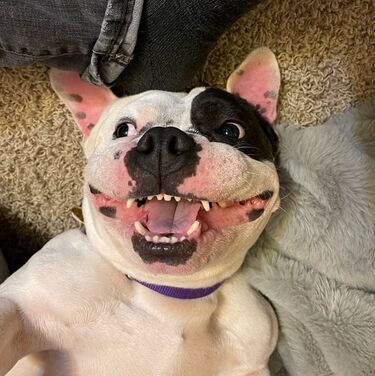 Name: Roscoe
Breed: Bulldog mix
Age: 3 years, estimated
Sex: Male
Weight: 58 lbs
Adoption Fee:  $400
Foster Location: Cedar Rapids, IA
Cats: Dog savvy preferred
Kids: Yes, but he can be overzealous and knock over smaller children.
Other Dogs: Yes, but he can be overzealous, see below for more info.
House Trained: Pretty much...There have only been a couple of accidents and it was either because he did not go outside before playing or because he got too excited
Demeanor: Alternates between lazy and playful
Energy Level: Low / Medium
Health Issues: Allergies of unknown origin, likely food related, prescription food is required.
Behavioral Issues: Can be stubborn at times.

Roscoe’s story didn’t start off very well, but he’s going to have the best ending!  Roscoe was found roaming the streets of Kansas City and was scooped up by animal control.  He came to Lucky Bulldogs when he needed a quieter environment and help finding just the right home.  Read on to see if you are the hero in his story.

Roscoe is the best of both worlds; he has the Bulldog good looks from his mother and the brains and energy of whatever lucky neighbor dog was his father.  He is both active and playful while loving to loaf around and nap.  His Bulldog side allows for short bursts of play time followed by naps and snuggles on the couch.  He will need regular daily exercise to maintain his manly figure and his mental health.  Roscoe can be a bit antsy and in your face without his daily burn off.  He loves to play fetch and it only takes 30 minutes or so to satisfy his energy/brain needs.   He is a tug-of-war aficionado, and he loves his chew toys too!  When he wants to play with his humans, he will gently hold their hand or foot in his mouth and nom on it.  This isn’t aggressive behavior, but his new family should be aware and decide if they want it to continue in their home.

People aren’t his only playmates; he loves playing with other dogs!  He’s never met a stranger, but he does have trouble interpreting social cues from dogs and can be “a bit much”.   His social impediment may be due to his young age or a lack of socialization as a puppy, but any future dog brothers or sisters will need to be laid back or equally playful.   Firm leadership and daily exercise/mental stimulation should help with this as well.

The only command we're sure he knows is, sit.  Roscoe would benefit from obedience classes and continued training to keep him sharp.   He is kennel trained but may take some convincing at first.  He’s working on it though!

When Roscoe was rescued from the streets, he had a benign mass on his bladder and urethra due to being intact and was unable to urinate normally.  He had the mass (and the boys) removed and now has a clean bill of health in that department.  When he first came to the rescue, he had some occasional urine dribbling, so he wore a belly band.  It became obvious he was intentionally peeing while wearing it because he would freeze up for a good 10-15 seconds and then resume whatever he was doing.  We ended up taking the belly band off, and if he gets plenty of outside time, he doesn’t have any issues. It should be noted he is not a one and done kind of pee-er.  We feel he might have trouble determining whether his bladder is empty after having a improperly working system for so long so he needs lots and lots of pit stops in the yard.  With time, he may be able to achieve that elusive one and done!

Roscoe has suspected food allergies and must continue with his specific food and treats. We’re working with the vet to see what he is specifically allergic to. Human food is an absolute no no as it can wreak havoc on his system.

Roscoe is a super sweet dog that only needs two things: an active, loving home and someone to throw tennis balls. Could it be you? 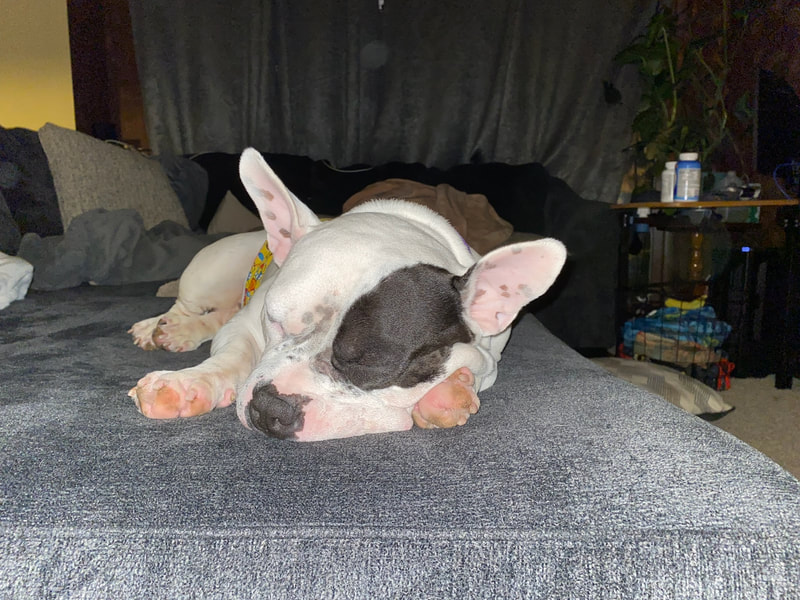 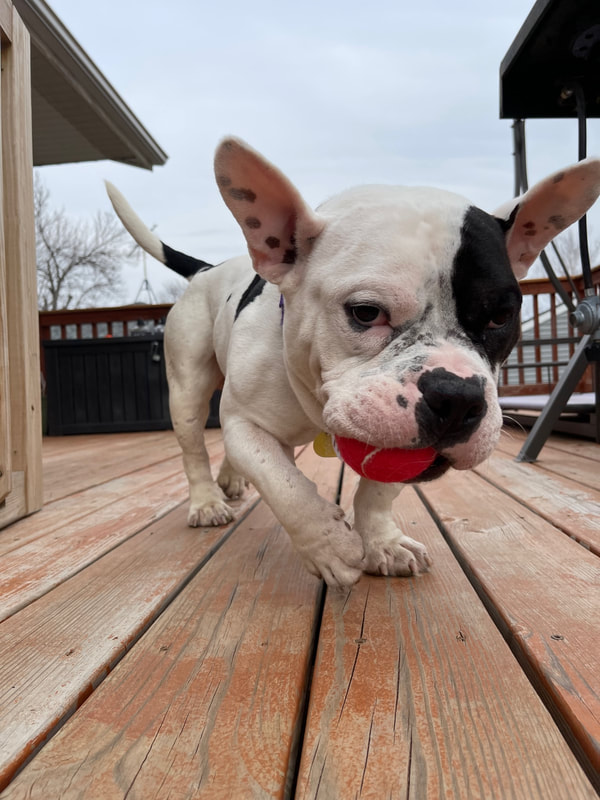 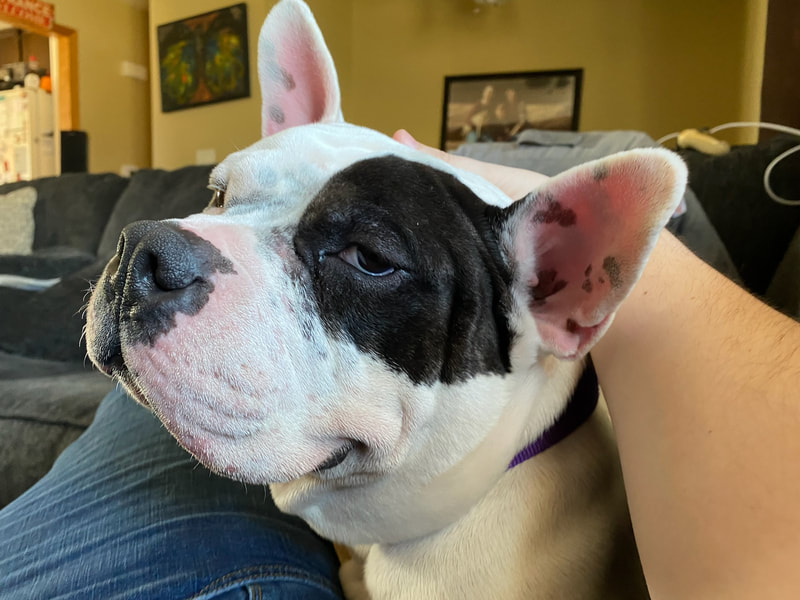 While in foster care, all our dogs are thoroughly vetted. Any discovered medical issues will be disclosed above. Our Lucky Bulldogs (and their smushie-faced buddies) are cleared by their vet for adoption prior to us accepting applications. All our dogs will be up to date on Rabies & DHPP vaccinations, up to date on Heartworm preventative after a negative Heartworm test, and spayed or neutered prior to being adopted out to their forever homes. Often times, our dogs are given dentals and sometimes nare-widening surgery if needed while under anesthesia. All surgical and medical history we have will be shared with adopters. Further details can be discussed with the foster volunteer during the phone interview for the applications that are chosen to proceed to the phone interview part of the adoption process.

All our dogs are crate trained unless otherwise noted on their "All About" pages.
Applications Closed
We will accept applications for our available dogs for 1-2 weeks except in cases of overwhelming popularity where we may stop accepting new applicants sooner. Once we have stopped accepting applications, we will review them and proceed with a phone call with our top two applications to chat about the dog being applied for, go over the adoption process, and answer any questions the potential adopter has. After phone calls take place, we will decide on our top applicant choice and proceed to contact them to schedule a home visit (in person or via video chat), and check vet and personal references before the adoption is ready to be completed. This process can take up to 6 weeks.